Tinker Juarez, three time US national champion, silver medalist at the World Championships, gold medalist at the Pan Am Games and member of both the 1996 and 2000 US Olympic teams has added another national title, the NORBA 24 Hour Solo championship. In Septemeber 2001 Tinker was inducted into the Mountain Bike Hall of Fame.

Answer: The distance and climb Tinker Juarez rode at the Subaru Gorge Games in Oregon.

At a time in the careers of most sport professionals, whether it be football or baseball or basketball, by the time you are 40, even the best of the best usually have retired having passed their prime. And this is talking about a team sport. Tinker Juarez continues to amaze everyone who knows him with his stellar performances. And I think those who race against him are probably just as amazed.

Tinker's new venue is the grueling 24 hour solo endurance race. Very simply, all the individual racers or team racers line up at noon, start the race, and 24 hours later the individual and team with the most laps wins. Doing anything for 24 hours is not easy even staying awake for 24 hours can be difficult enough. But racing for 24 hours and then setting new records in the sport when you are older than the guys in team sports who have retired, well, you have to admit Tinker is a remarkable athlete with an incredible work ethic. It is this dedication and sacrifice that accounts for Lance Armstrong's winning ways and it is the same with Tinker.

Tinker competed in the Subaru Gorge Games in Oregon 21-22 July 2001 along the Columbia River with the peak of Mount Hood in the background. The course is 10 miles with an elevation rise of 1500 feet per lap. The average course lap time is 1 hour 30 minutes. Tinker's average time per lap over 24 hours was 1 hour 12 minutes. This meant Tinker finished more than 20 miles ahead of his closest competitor in distance or about 2 hours and 45 minutes in time. As Tinker tells it, "Well, I just got back from the Gorge Games in Oregon and I did well, winning 2 laps ahead of second place. I ended up with twenty laps total, which is a new record. I was happy with the way I rode, and even though I was extremely tired in the end, all went well. All in all, I rode over 200 miles, and climbed over 20,000 feet." According to the race info sheet, each lap has an elevation rise of 1500 feet. So in fact, Tinker climbed 30,000 feet or more than enough to get over Mt. Everest!

Tinker's first ever 24 hour endurance race had a similar result. It was at the "24 hours of Adrenalin" Monterey, California. It was held a month, May 5-6, before Cannondale's (www.cannondale.com) 30th Anniversary Homecoming June 3-5, 2001 in Pennsylvania where everyone had an opportunity to ride with Tinker and visit the factories where Cannondale produces their fabulous bikes, quads and motorcycles. Having never raced for 24 hours before, and after some convincing of the Cannondale team to let him race one of these things, on a Saturday noon Tinker set off into the unknown for 24 hours. By 10:30 am the next morning the race sponsors told him to get off his bike and rest. He was so far ahead of second place that they had no chance to match his lap mark of 24 laps. So at noon the following day, Tinker walked his bike across the finsih line and had a first place finish in his first ever 24 hour endurance race. In fact, including team member racers who may race just one lap in the 24 hours, Tinker had the single fastest lap time of the race. This first place finish qualified him for the championships to be held in Idyllwild, California September 22-23. His next 24 hour race, "24 hours of Adrenalin" is in Winter Park, Colorado, on Aug. 4-5. The last "24 Hours of Adrenalin" will be in Idyllwild. This year is the first time in awarding a national jersey.

Tinker won the 24 Hours of Adrenalin race in Winter Park, Colorado on August 4-5, 2001 on his Cannondale team bike. That victory won him the US National title to go along with his 3 previous national Norba mountain biking titles.

As happened in the previous race, Tinker won the race and was two laps, or more than 2 hours ahead of the second place finisher, Nat Ross in the Norba Solo category. In fact, Tinker’s number of laps and time was better than the 2 man team winners in the 2 Person category.

To top off the race weekend for Tinker, there was the announcement of his selection into the Mountain Bike Hall of Fame in the racer category. Congratulations Tinker, a well-deserved honor and one Cannondale should be very pleased with as well. The induction ceremony takes place during Interbike 2001 in Las Vegas.

Tinker’s next 24 hour endurance race will be the World Championship in September in Idyllwild, California. 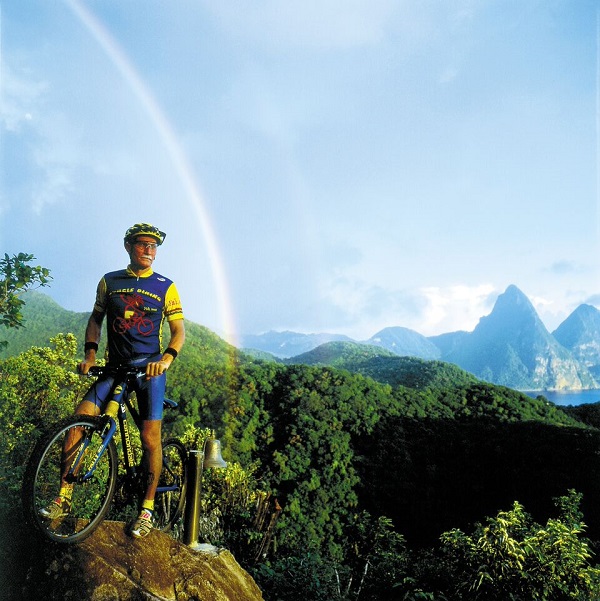